Working through trauma is never the same for every person.

Working through trauma is never the same for every person. 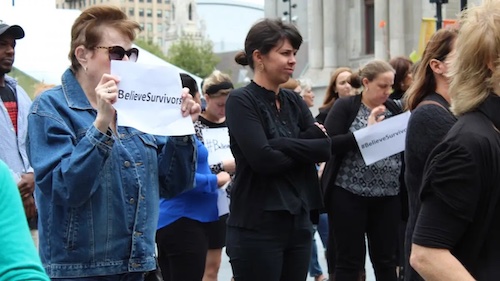 However, storytelling can help with healing from experiences that cause trauma long after they are over.

First Person Arts, a nonprofit organization focused on the power of storytelling, will host a sexual harassment workshop in partnership with the Pennsylvania Human Relations Commission (PHRC) on June 27.

“Let’s not just talk about something — let’s figure out how to move forward, which I think is very much the Philly way,” Brunson said.

The PHRC will have investigators present at the event to help file complaints of sexual harassment and to educate on how to become an ally for survivors. There is plenty of awareness in the media about sexual harassment, but there’s not enough information about how to stand up against it, Brunson claimed.

“What [isn’t] necessarily out there is how to heal, how to be empowered, how to be an ally, how to be a whistleblower,” Brunson said.

The workshop will be divided into four parts: Stories of Allies and Allyship, Stories of Whistleblowers, After it Happened: Stories of Healing and Empowerment, and The Writing Zone. Storytellers Colleen Kennedy, Kat Laff and Emily Woods will be sharing their experiences throughout the event.

“This is an opportunity for them to release and to tell the world. It gives them a voice,” Brunson said. “You know they may not have an opportunity to confront, but just speaking their own truth is empowering and they deserve it.”

Coming forward about incidents of sexual harassment is not always easy or immediate for survivors. This workshop will provide an uninterrupted and nonjudgmental space for them to share their stories.

“Sometimes people don’t report because they’ve suppressed memory already. This is a result of trauma wreaking havoc on their system,” Brunson explained.

Through the bravery of the storytellers to come forward, this workshop will prove that there is life after such a traumatic experience.

“Let’s not just talk about something — let’s figure out how to move forward, which I think is very much the Philly way.”

“There’s a part of our process where we spend time talking about how the past does not have to defeat your future,” Brunson said.

Dr. Marquita Williams and Dr. Daniel Lee from the Philadelphia Department of Behavioral Health and Intellectual disAbility Services will lead the event’s closing workshop. They will focus on checking in with the audience and making sure everyone is in a good place to go home after hearing such impactful stories, Brunson said.

“Responsible art doesn’t just open you up and then send you on your way. Responsible art is also in partnership with action and healing,” Brunson said.

SEXUAL HARASSMENT: BY THE NUMBERS

#MeToo, #TimesUp and other social hashtags point to the fact that we still have to deal with sexual harassment in this day and age. The numbers show that both women and men are still dealing with some form of sexual harassment or abuse at alarming rates.

1-in-6 | The number of American women that have been a victim or have reported being a victim of sexual harassment on some capacity, according to Rainn.com.

5 | Only five out of every 1,000 perpetrators of sexual harassment will be put in prison, according to Rainn.com statistics.

92 | Every 92 seconds, an American is sexually harassed, according to Rainn.com. In addition, a child becomes a victim every nine minutes.

81 | That’s the percentage of women who have faced some form of sexual harassment on the street, as found in a 2018 study by Stop Street Harassment. On the other hand, 43 percent of men reported facing this kind of harassment.

70 | The percentage of people who do not report sexual harassment in the workplace, with that number scaling as high as 90 percent in some cases according to a survey from the National Women’s Law Center.