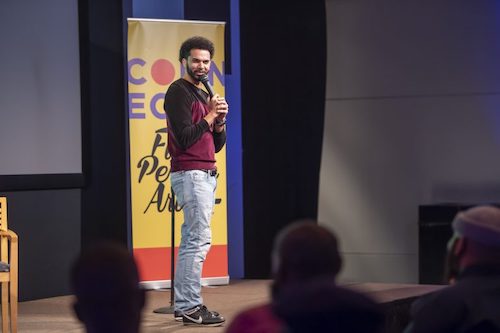 Will Little walked on stage wearing an orange jumpsuit, hands held behind his back, head faced down.

As he told his story of life in and out of prison, he unzipped, revealing another layer of clothes underneath the orange.

“I did 10 years in the penitentiary. Anger, frustration, hurt, pain, guilt, then I decided to dig a little deeper within myself because I knew I was better than the circumstances I grew up in.”

Will stepped out of the jumpsuit. He told of eventually becoming a successful barber, and most importantly, giving back to his Philadelphia community.

Shedding an orange jumpsuit, South Philadelphia resident, Will Little speaks of his time in prison and how he transformed his life after his release. (Jonathan Wilson for WHYY)

Last night, at WHYY, First Person Arts partnered with the Engaging Males of Color Initiative (EMOC) to host performances from men of color about their experiences returning from jail or prison.

Each performer, Ali Siddiq, Peedi Crakk, Vandeth Sek, Che Guerrero, and Will Little, used rap, comedy, or storytelling to guide the audience through stories of encouragement, perseverance, hope and a lot of laughter.

Chris Cotton, Philly comic and writer, warmed up the audience with jokes about gentrification in South Philadelphia and failed attempts to skip school as a kid.

Siddiq, the headliner of the evening, described giving in to peer pressure as a child, and how he changed post-incarceration.

“I got busted at 19 with 5 kilos of dope, $95,000, and a gun that was not mine, I don’t care what them people say, and I said all that to say this, the same way I tried to hustle and do wrong, when I got out of prison I did that much extra hustling to do right,” he said.

After being incarcerated, Siddiq showed up three times to a clothing store in the mall before they hired him. Now he’s one of the biggest comedians in the United States.

Cotton and Dr. H Jean Wright II, director of Behavioral Health and Justice Related Services at DBHIDS, spoke between each performance to help analyze each story.

“You already knew what was behind you, and you knew if you repeated those steps, that the same thing would occur… What would happen if you did something different?” said Wright.

From being undocumented to the problems that come from being labeled a “criminal,” they persevered, and never returned to prison through the revolving door that is so common.

Philadelphia-based rapper Peedi Crakk performed a new verse, “I search and seek info I need to plant the seed and brand. Since my release I keep myself busy being a man, thanks to G-O-D and my fam here I stand, freedom in hand.”

At the conclusion of his standup performance, Peedi Crakk performs a rap. (Jonathan Wilson for WHYY)

Before the event, the performers sat down and reflected on the importance of sharing their stories.

Vandeth Sek, a storyteller from West Philly, had a warrant out for his arrest for eight years and now works at a congressional office in Philadelphia.

Sek wants to inspire youth, “I want to make sure (kids) get the opportunity that I didn’t have growing up… and I want to make sure to encourage them to put themselves in a position where they can continue to emerge and be successful in life.”

For others, it’s about identifying trauma. “It isn’t until you speak to other people, to learn that what I’ve been through is not normal,” said Philadelphian comedian and host Che Guerrero, who spoke about growing up undocumented.

Sharing their stories is not only for the audience but also for their own well-being.

“Whenever I get to share my story it’s therapeutic,” said Peedi Crakk.

Siddiq agrees, saying laughter can heal, and that just smiling can be a revolutionary act.

“A lot of us had this permanent frown on our face from mental scars that we suffered, whether in the streets hustling or in prison. So it’s just good to be in an environment to show other people that you can smile through all that adversity that you went through before.”